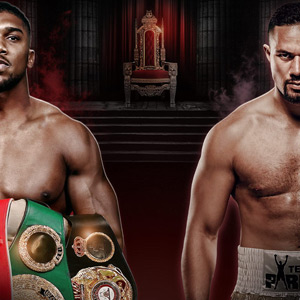 Cardiff is set to once again be the focus of one of the biggest sporting events this year when IBF and WBA world champion Anthony Joshua steps into the ring to face New Zealand’s WBO heavyweight champion Joseph Parker at the Principality Stadium.

Joshua returns to the scene of his previous victory against Carlos Takam and will be aiming to making it 2 from 2 when Anthony Joshua v Joseph Parker takes centre stage at Cardiff’s city centre stadium.

Principality Stadium Manager Mark Williams commented: “Joshua vs. Parker is another exciting feat for Principality Stadium which holds the record for the largest indoor boxing crowd after Joshua’s title defence in Cardiff last October. Afterwards it was a case of ‘when’ not ‘if’ boxing would return, and we are thrilled to be working with Matchroom once again to raise the bar for live boxing entertainment on Saturday 31st March 2018.”

Inside the stadium, boxing fans can expect yet another spectacular arena transformation, just days after the NatWest 6 Nations and ahead of four nights of Ed Sheeran and more. 2018 is set to be yet another exciting chapter in the stadium’s illustrious history!”

Saturday 31st March 2018 has now become a date not only for boxing fans but all sports fans this year. Multiple heavyweight world titles will be on the line with both men determined to walk away with them all.

Joshua comes into this fight now used to the hype and prestige of these fights: “It’s a unification Heavyweight Championship fight, everyone knows what happened the last time I was in one. These fights aren’t easy, there’s a lot on the line so respect to Parker for taking the fight. I’m looking forward to it, training camp is under way.”

Time to unite a member of the family #AJBXNG pic.twitter.com/bjofilhvXD

Parker who holds a record of 24-0 comes into the biggest fight of his career ready to become a household name and cement his place at the top of the Heavy weight division “Anthony Joshua is in for a huge shock, a couple of months ago I heard him say ‘why should I be worried about this little kid from New Zealand’? Well, now he’s about to find out. And the world is about to find out whether AJ can really take a punch. My entire existence is now devoted to proving what the boxing world already knows.”

Saturday March 31st the talking will stop and two of the best heavy weight fighters in the world will go to war in what is the biggest fight of both boxer’s careers to date. No doubt both will leave with their heads held high but only one will be leaving with their perfect unbeaten records still intact.