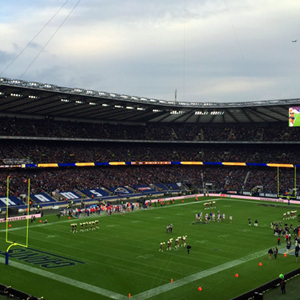 NFL London 2018 to be bigger & better than ever

The NFL London Games have become one of the most anticipated events of the year, especially on this side of the pond, with a host of top NFL franchises appearing in regular season games at top stadium venues across the UK.

Fans in the UK can look forward to another mouthwatering series in the NFL London Games 2018, with the Jacksonville Jaguars already lined up to make their annual touch down in London.

Another team reported to be making the trip across to London this autumn is the Oakland Raiders, having agreed to give up a home fixture in order to play in the 2018 London Games.

The Raiders have previously featured in London in 2014, but their huge global fan base will be delighted to see them star in London, giving international fans a chance to see them in action.

Alistair Kirkwood, NFL UK managing director is keen for all 32 NFL teams to play in the hugely popular International Series in London and the majority already have. The final teams yet to feature are the Seattle Seahawks, Green Bay Packers, Tennessee Titans, Carolina Panthers, Philadelphia Eagles and the Houston Texans, any of which could make their debut in London this autumn.

The full line up of the 2018 NFL London Games is due to be announced any day now and whichever teams do features, it is sure to be a blockbuster series of showdowns in London this October.

Whether you’re a travelling fan wanting to visit London or a local NFL lover wanting to experience the series, you can experience game day in VIP style with official 2018 NFL London hospitality packages or a VIP box, each complete with fantastic food, drinks, NFL star appearances and VIP ticket for your game of choice this autumn.