Posted by Hospitality On Feb 08, 2018 Boxing,Golf,NFL,Rugby 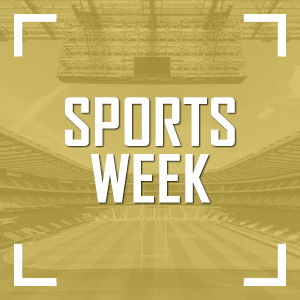 Catch up on all the latest action in Sportsweek

The Principality Stadium hosted the curtain raiser for the NatWest Six Nations 2018 and home supporters were treated to a dominant display from the home side as Wales produced a fantastic performance to put Scotland to the sword in the opening match in Cardiff.

Scotland were well-fancied to cause an upset leading up to kick-off, but Wales came out on top in the early stages of a match that was played at a relentless pace.

Leigh Halfpenny and Gareth Davies scored tries early on to give Wales the advantage going into the break, with the former converting two penalties in the second period to stretch the home side’s advantage further.

Scotland’s Peter Horne went over for a try late in the second half but it would only be a consolation, as Warren Gatland’s Wales going on to secure their 50th victory of the Kiwi head coach’s tenure.

The Stade de France in Paris was rocking for the opening tie of the NatWest Six Nations and expectations were high as Les Bleus faced Ireland in one of France’s toughest challenges of the campaign.

France, despite having more possession in the opening exchanges, handed the advantage to Ireland through a series of penalties, awarded due to French indiscipline.

Ireland maintained their advantage through to the second half, but Jonny Sexton missed the opportunity to give his side a 15 – 6 lead which would have left France needing more than one score to take the victory.

That left the door open for France who, buoyed by the raucous capacity crowd at the Stade de France, worked an opening for Teddy Thomas and the electric winger danced through Irish backs to give the French the lead for the first time in the match on 71 minutes.

13 – 12 in front, the French resistance had less than 10 minutes to repel Irish advances, but the drama was anything but over.

Ireland’s forward powered them forward over an incredible series of more than 35 phases, to give Jonny Sexton space for one final effort on goal. With the clock 83 minutes, the talismanic number 10 duly received the ball and nervelessly stepped up to convert the drop-goal from long range, sparking scenes of jubilation and disbelief among the fans.

England kicked off their 2018 Six Nations campaign in fine form against a brave Italy side that battled to the last.

Eddie Jones’ side set the tone early on in the match with a wonderful move, working the ball out wide to Anthony Watson, for the flashing winger the go over on the touchline in the opening minutes.

England were like lighting out of the blocks, soon creating space again for Watson to score his second try of the match.

Gone are the days of Italy capitulating; the Azzurri put up a spirited response, using their power and poise on the ball to create an opening for Benvenuti out wide who went over in the corner, raising the roof at the Stadio Olimpico.

Sensing the Italian’s resurgence, England pair Owen Farrell and George Ford took matters into their own hands, combining brilliantly in a slick give and go which saw Farrell cross the whitewash and stretch England’s advantage.

After the break, England showed their fitness and determination as Ford and Farrell combined again to score, before Six Nations debutant Sam Simmonds showed an electric turn of foot to power through the Italian back line and score England’s sixth try of the match to claim a bonus point victory for Eddie Jone’s side on the opening weekend.

One of the biggest sporting events in the world featured at the weekend, as Minneapolis’ US Bank Stadium hosted Super Bowl 52.

65,000 fans inside the stadium and a global TV audience of over 100 millions NFL fans watched one of the greatest Super Bowl games in history.

Tom Brady’s much fancied New England Patriots were outscored by the Philadelphia Eagles, who shook off their underdogs tag in some style to lift the Vince Lombardi trophy for the first time in their history.

The 41 – 33 scoreline was one of the highest points totals of all time and served as a fantastic showcase for American Football on the biggest stage. The Eagles can now look forward to a trip across the pond for the first time to play the Jacksonville Jaguars this October at Wembley Stadium in the NFL London Games 2018.

The next stop for Okolie will be on the Anthony Joshua v Joseph Parker undercard at the Principality Stadium next month. On the undercard, the exciting and talented Joshua Buatsi took further strides to his ultimate goal of a world title with a explosive stoppage against Jordan Joseph.

The European Tour stopped in Malaysia this week for the Maybank Championship. Lee Westwood made a welcome return to form but was not enough to stop 21 year old Shubhankar Sharma as he posted an outstanding final round 62 to claim a two shot victory. The European Tour moves to Oman next for the NBO Oman open. UK fans can witness European Tour action at the Wentworth Club for the BMW PGA Championship in May 2018.