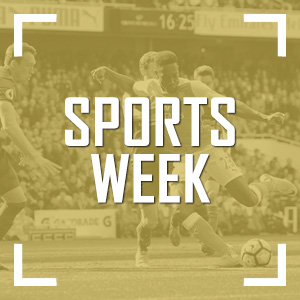 Catch up on all the latest action in Sportsweek

The fifth round brought with it all the magic of the FA Cup, reminding football fans why it is the oldest and one of the most special cup competition in the world.

The Premier League sides showed their class with Manchester United beating Huddersfield 2-0, Brighton progressing with a 3-1 defeat of Coventry City and Southampton advancing thanks to a 2-1 victory over fellow relegation battlers West Brom.

Fans were left wondering whether the weekend’s action would produce any shock upsets, but they didn’t have to wait long. The magic of the FA Cup was certainly on show when Rochdale, rooted to the bottom of League One, held Tottenham Hotspur to a 2-2 draw thanks to a late equaliser on Sunday afternoon, earning a well-deserved dream trip for their fans to Wembley Stadium. A resolute Sheffield Wednesday also managed to battle to a draw against in-form Premier League side Swansea City to a 0-0 draw to keep their FA Cup dreams alive.

The shock of the round came on Monday night, when League One Wigan Athletic hosted runaway Premier League leaders Manchester City. The usually free-scoring City were left frustrated by a well-organised Wigan side in this fifth round tie and were reduced to 10 men at the stroke of half time as a result of a rash tackle by Fabian Delph, who was eventually shown a straight red. The fans at the DW Stadium stated to believe that their side could repeat their heroics of the 2013 side that battled past Manchester City in the Emirates FA Cup Final, and their giant killing dreams became reality in the 79th minute when Will Grigg raced through on goal and clinically fired past the sprawling dive of Claudio Bravo. Late City pressure wasn’t enough and Grigg’s strike would be enough to send Wigan fans into raptures and his side into the pot for the sixth round.

2018 is packed full of spectacular boxing match ups and you cannot help but feel that Saturday at the Manchester Arena was just the beginning that should have all boxing fans begging for more. Some of the biggest names in boxing such as Tyson Fury watched on from the ringside seats and boxing fans were treated to an excellent bout of boxing between George Groves and Chris Eubank Jr. in the World Boxing Super Series semi-final.

Promises of destruction and knock-outs made by both did not materialise, but a very good display of boxing skill and ring craft was present in abundance. George Groves dictated the fight and left the less experienced Eubank Jr. struggling to make any impact, allowing Groves to build a commanding lead on the score cards. The last round saw Eubank Jr have the most success as Groves sustained a suspected dislocated shoulder, but it was not enough. Groves’ injury means that the World Boxing Super Series Final is now on hold until the extent of the damage is known but with Anthony Joshua vs Joseph Parker coming next, boxing fans will not have to wait too long before another mouth-watering clash.

This time of year means one thing to racing fans and that is festival time but its not all about the Cheltenham Festival. There were some very strong Grand National clues this weekend as key contender Blaklion struggled to carry top weight around Haydock Park, leaving Yala Enki to cruise past the post to claim a comfortable victory, with many hot fancies for the most famous steeplechase also not finishing their race. Connections of Blaklion cited the ground as a reason for defeat, but with the weights announced for the Randox Health Grand National last week will it be too much for him on the big day?

There were also some Cheltenham clues for racing fans over the weekend, mainly at Ascot Racecourse in the Betfair Ascot Chase, where a gallant effort from the veteran Cue Card was not enough to stop Waiting Patiently battling past him on the run in. Although The Festival has not been confirmed by connections as the target for Waiting Patiently, Cue Card fans will once again be cheering him on in one of the biggest races of the year – the Cheltenham Gold Cup – as owner Jean Bishop feels “He deserves one last shot”.

Only six weeks remain until the first major on the calendar, The Masters, gets underway and players are already starting to emerge as real contenders to take the famous green jacket in Augusta. Bubba Watson, a former winner, showed he is somewhere near back to his best with a 2 shot victory in the Genesis Open at Riviera this weekend.

Their was plenty of European interest in California with reigning Race to Dubai winner Tommy Fleetwood involved as well as Rory Mcllroy, Rafael Cabrera-Bello and defending BMW PGA champion Alex Noren. Although none threatened the top of the leaderboard, you can be sure they will all have their A game ready for the big events coming up including the BMW PGA Championship at Wentworth in May.

A rest week in the NatWest Six Nations allows teams a chance to recover from injuries and introduce new players into their squads. Scotland have brought in 6 new squad members and hope to continue their momentum into the England match at Murrayfield following their 32-26 victory over France in week 2. England are also set to ring the changes for the crucial Calcutta Cup match this weekend. Nathan Hughes comes into the squad and could go straight into the starting line up alongside Joe Marler and James Haskell now that they have served their suspensions.

Although the Grand Slam is no longer possible for Wales, the bonus point scored against England now means that a strong result against Ireland at the Aviva Stadium this weekend would keep their championship hopes still very much alive. Undefeated Ireland only have one key injury doubt which is Luke McGrath who injured his knee playing for Leinster at the weekend. With the 6 Nations Championship still all to play for, we are set for another weekend of gripping rugby action from the very top level.